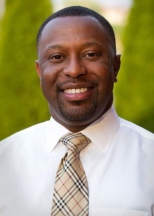 Councilman Chris Jones spoke about his plans for a sustainable future for Harrisonburg. He stated the need for people of color on committees for organizations like CAAV. If re-elected, Chris wants to create a position that addresses sustainability. He stated that a lot of people don’t have choices or don’t know their choices for sustainability. His goal is to work with groups like CAAV to educate all people about the benefits of sustainability.

Most months, Sept – May, the CAAV Coalition-Building Committee invites a community member or group to present to the CAAV steering committee about projects with which they are involved. We are grateful to be working with so many other groups and individuals passionate about creating a more resilient, healthy and just world.