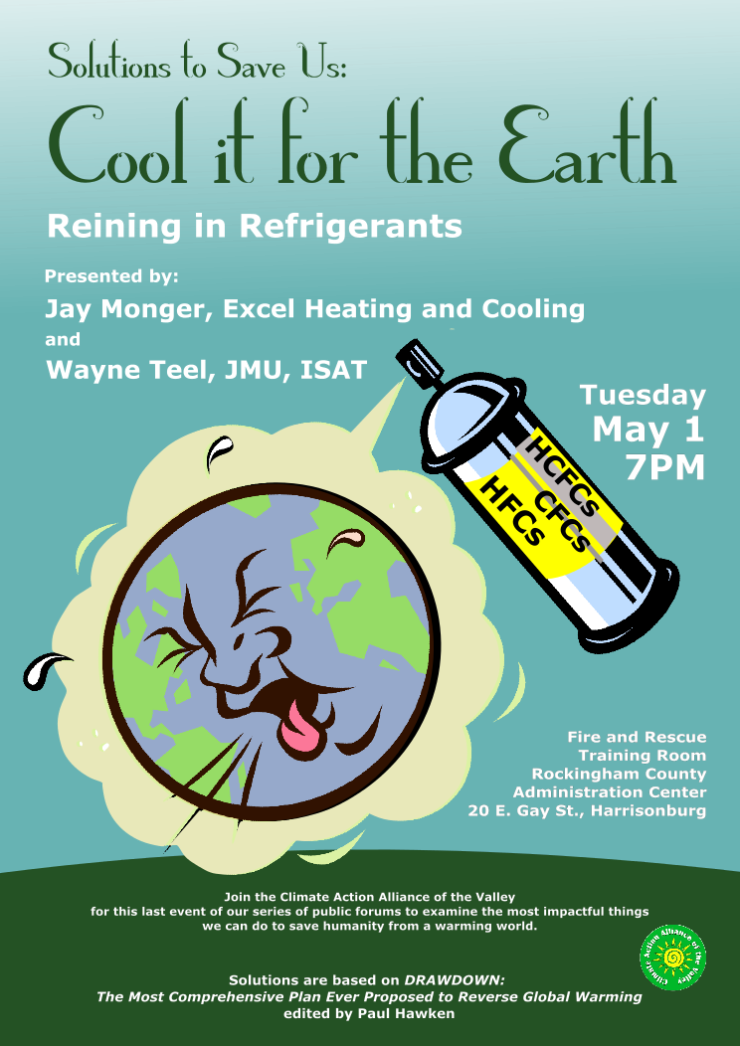 The Climate Action Alliance of the Valley hosts the third and last public forum in a series based on the book Drawdown: The Most Comprehensive Plan Ever Proposed to Reverse Global Warming edited by Paul Hawken. Refrigerant management offers the number one most impactful action humans can take to prevent runaway global warming.

We’ll hear from Jay Monger of Excel Heating and Cooling and Wayne Teel, professor in the Department of Integrated Science and Technology at James Madison University.

New Delhi India will have temperatures in the triple digits this week. Phoenix AZ will reach 99 and a man running the London marathon last week died from the unusual heat. Climate change will only bring more and more extreme temperatures, and people and food will need more and more air conditioners and refrigerators.

If the current refrigerants, HFCs, spare the ozone layer but have 1,000 to 9,000 times greater capacity to warm the atmosphere than carbon dioxide, we have a huge problem. Solving it should be one of our highest priorities.
Learn more about the issue and solutions from JMU Professor Wayne Teel and find out how it will affect us in the Valley from Jay Monger, CEO of Excel Heating and Cooling.

In October 2016, officials from more than 170 countries met in Kigali, Rwanda, to negotiate a deal to address this problem. Through an amendment to the Montreal Protocol, the world will phase out HFCs—starting with high-income countries in 2019, then some low-income countries in 2024 and others in 2028. Substitutes are already on the market, including natural refrigerants such as propane and ammonium.

Scientists estimate the Kigali accord will reduce global warming by nearly one degree Fahrenheit. Still, the bank of HFCs will grow substantially before all countries halt their use. Because 90 percent of refrigerant emissions happen at end of life, effective disposal of those currently in circulation is essential. After being carefully removed and stored, refrigerants can be purified for reuse or transformed into other chemicals that do not cause warming.