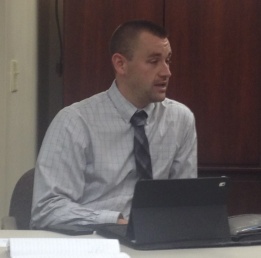 At the steering committee meeting of February 20, our guest was Adam Fletcher, currently the Director of Community Development in Harrisonburg.  He has also been City Planner, so he has a grasp of much of what is happening in Harrisonburg just now.  WARNING!  Adam speaks very very fast!  So what follows may only resemble what he had to say!

His department has much to do with regulations:  with property, land use, engineering, planning and zoning as well as building inspections.  They are the ones who help us all avoid nasty surprises in public places as well as on private property.

They have adopted International Building Codes as well as Virginia Building Codes to ensure that what’s put up doesn’t fall down.  There are 25 people working in the department.

Listed in the Department’s section of the City of Harrisonburg website are both “By Right” uses as well as those closely regulated by the Commonwealth.  Virginia is a “Dillon Rule” state:  established in the 1860s and never overturned:  Whatever the state says you can do is OK.  If there is no mention, no ruling applicable to your question, you can’t!  Other states reverse that.

By state code, localities have the ability to control land use (zoning: 1939) i.e. what you can or cannot do.  “We list permitted uses.”  All others are prohibited, governed by zone:  residential, commercial, industrial. This includes set-back regulations, how close you can build to the property line.  However, state institutions like JMU don’t have to abide by local zoning:  observe how close the new Madison Hotel/parking lot is built to the curb and property lines.  Streets and water/sewer are controlled, so they have to abide by rules of interconnection.  All have to abide by environmental rules that come from the state, such as storm water management, air quality, etc.

Zoning such as “R-1“ means that to create a new lot, there must be at least 10,000 sq.ft. of land, and no more than 4 units/acre may be built.  B-1 (such as downtown) has the highest density, mixed use, in that you can both live and work in the area with no minimum space requirement. In B-1 zone there are no set back requirements and no parking requirements.   “Special use” permits may be requested and issued in an area zoned for another use.  That is a rule that is circumstantial, based on the characteristics of the property as well as the surrounding neighborhood.

Annexation is the only way political entities may grow.  In 1983 the state outlawed “hostile annexations” after Harrisonburg annexed the most highly valued commercial area of the county: Valley Mall. But if both entities agree, “friendly annexations” still occur.

Following a question about the Comprehensive Plan for the City, Mr. Fletcher replied that the current required periodic update is expected to be completed by late fall of this year.  These recommendations are only suggestions.  The voting is left to elected officials.  Updates of data, on the other hand, are staff originated.  Then the community gets involved.  Community involvement is aspirational and may run into legal barriers and previous regulations.  “Ordinance amendments” are of critical importance.  Pay attention!

Planning staff do respond to community groups that persist in petitioning change, and staff reports are an important “change detection tool”, posted online.  At the state level, “loopholes” are more often created by specific entities rather than community groups.

In closing he said “The democratic process does work if people get involved.”