About the biggest thing to happen lately in the world of Virginia Clean Cities (VCC) is the allocation of $14 million from the Volkswagen emissions scandal settlement to establish a network of electric vehicle (EV) charging stations in Virginia. This dramatic expansion of the state’s EV infrastructure stands to support and encourage putting a million EVs on the state’s roads over the next decade.

But this was an aside to the discussion Matt Wade, Deputy Director of VCC, brought to the CAAV meeting on Tuesday, October 17 as our invited Coalition Building partner of the month. Matt brought us up to speed on the current use of ethanol in fuels for gasoline engines. Ninety-seven percent of all fuels at the pumps are at least a 10% blend of ethanol with gasoline (E10). All cars made since 2001 can use E15, a fuel blend with 15% ethanol. E85-enabled vehicles have a yellow gas cap and can accept any blend up to 85% ethanol.

The use of ethanol in gasoline offers a locally made product that utilizes the carbon short term cycle and therefore reduced greenhouse gas emissions. 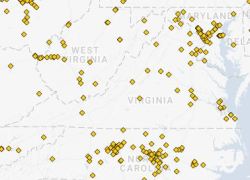 Since 2015, VCC has been involved with the Mid-Atlantic Biofuels Infrastructure Partnership which was granted $5.8 million in federal funds to expand the number of E15 and E85 fueling stations in Virginia, Maryland and Washington DC. Waynesboro and Mt. Jackson each have an E85 pump at a Sheetz Store. These are the closest to Harrisonburg. Find them all here.

Hopewell, VA, on the James River about 20 miles south of Richmond is home to the only ethanol plant on the east coast. It operates 24 hours a day using corn grown by Virginia and Maryland farmers.

Thanks to Matt for his work on climate-friendly transportation and for sharing his enthusiasm for clean air with CAAV.

Photo below is from the Harrisonburg July 4, 2017, celebration at Turner Pavilion. CAAV and VCC along with members of Renew Rocktown showed off EVs and staffed tables with information about renewable and clean energy initiatives.