We were delighted to have Eastern Mennonite University Provost Fred Kniss as our Steering Committee speaker this month.  He brought a surprise in the form of Doug Graber Neufeld of the EMU Biology Department, who has recently been named Director of the Center for Sustainable Climate Solutions (CSCS).  CAAV committee members have been greatly anticipating more information about how the Center is developing, and what the role of the Center is expected to become.  We learned all that and a great deal more that has transpired in the past year from Dr. Kniss who has been the interim director for the CSCS.

A very important meeting was held last spring and several important partners have joined on the CSCS venture.  Right now those include not only the founding collaborators (EMU, Goshen College, and Mennonite Central Committee), but also representatives from various other Anabaptist stakeholder groups, including Anabaptist Mennonite Biblical Seminary, Mennonite Mission Network, Everence, and the Mennonite Creation Care Network.

Begun with a generous gift from EMU alumnus Ray Martin, as a “visible statement to the larger world that Mennonites are serious about climate change,” the Center is intended to advance thinking and action in faith communities to mitigate climate change through fostering research, innovation, education and collaboration to promote sustainable living on earth in the context of environmental justice and creation care.

Dr. Kniss pointed out that a sustainability component is already a part of all majors at EMU.  An energy audit by Siemens Corp. found little at the university to critique, as they have been working on energy efficiency and renewable energy for years, installing the first solar panels on their library before other universities in the area found that impetus.   They have completed a broad survey of 33,000 Mennonites, starting with clergy, on behaviors and practices.  They describe the results in terms of Yale University’s  “Six Americas” with the 6,000 responses in categories ranging from “alarmed” about climate change to “dismissive”, but were pleased to learn that Mennonites already appear more concerned than other faith groups or Americans in general in surveys of a similar nature.

A big question for both staff and the oversight board is the role of advocacy in the Center.  This is a school where students and donors don’t all agree, and there will have to be work to bring them along. Also should they focus on mitigation (the founding donor’s intent) or, at this point, adaptation or both, since the climate has already changed in many parts of the world?  Should they focus on one or two things where they might have a real impact, or spread resources more widely?–focus on their own efforts or on supporting those of others?  These are big and important questions, and it is obvious that the necessary focus and study—and probably a lot of prayer—have been put into beginning to discern the answers that will guide the future of the Center.  We congratulate all those who have brought the Center this far in a very short time, and feel thankful for major help in the endeavor to fight Climate Change in still beautiful but increasingly challenged Earth. 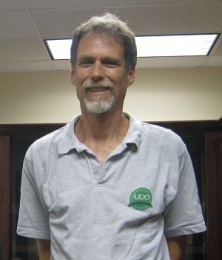 New CSCS Director Doug Graber Neufeld (photo at right) had just one remark to make at the end of the meeting.  He has recently returned from a two year sabbatical and research period in Kenya, and says “There are no climate change deniers there”.

There is a wonderful website at www.sustainableclimatesolutions.org where many questions may be answered; you are encouraged to check it out.  A lovely and informative brochure is also available upon request.