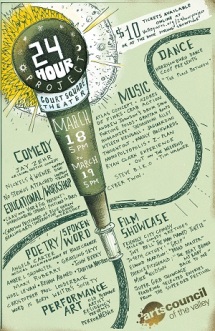 Harrisonburg’s Arts Council of the Valley hosted their 3rd annual 24 Hour Project at Court Square Theater from 5:00 pm, March 18 until 5:00 PM, March 19, 2016. “Featuring music, drama, comedy, dance, poetry, workshops, and many other forms of performance art, the event is a celebration of community and collaboration through a non-stop, 24-hour run of performances by artists both local and broad,” and is used to help raise funds for the Arts Council.

For the second year in a row fossil fuel-driven climate concerns made an appearance at this event. At 3PM on Saturday, March 19, CAAV members Cathy Strickler and Joy Loving, along with several other volunteers from the area, presented a 20-minute skit at Court Square Theater’s 24 Hour Project. The skit was a follow-up to the November 29, 2015, Postcard to Paris event in downtown Harrisonburg held to add our voices to “the global plea sending an urgent message to the pivotal United Nations Conference on Climate Change convening in Paris. (And to) help create a new coalition of faith groups, student and environmental groups, business and government, to build positive changes in the Valley.”

The performance included drummer Nic Melas playing his unique box drum, participants reading the postcard’s actual messages and several other sayings about our need to nurture and protect the earth. In addition the skit presented a reenactment of the transition of the world from fossil fuels to a renewable energy future by Earl Martin and a young girl representing the next generation being forced to deal with our climate issues. Throughout the skit, a slide show of colorful pictures of people helping nature displayed on the screen behind the participants. The postcard itself was also displayed on stage throughout the skit.

The skit is available for use by anyone interested. It could provide local students a great opportunity to present its message to their classmates. If anyone is interested in obtaining the materials, email contactcaav[at]gmail[dot]com.

Click on the image at right for a one minute segment of the performance.