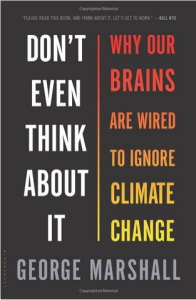 I recently finished reading Don’t Even Think about It – Why Our Brains Are Wired to Ignore Climate Change by George Marshall, Bloomsbury, New York, ©2014, ISBN: 978-1-62040-133-0.  As one who tries to engage the public on the issue, I found the book to be very helpful in understanding the full dimension of our reluctance to talk about climate change and in gaining insight into how I might approach the subject. As Marshall notes, “If climate change becomes intentionally harmful only when people know they are causing it, is it any surprise that most people do everything they can to avoid learning about it or accepting that it exists?”

As important as the moral dimension of climate change is, Marshall cautions that we must be very careful in raising that dimension. As Jonathan Haidt points out in his book The Righteous Mind, various groups in our culture place different degrees of emphasis on each of the six moral foundations.  Consequently, moral demands must be carefully tailored to speak to the values of the group being addressed or they will fail to have the desired effect, and may backfire.  In fact, when discussing framing (i.e., how we present the issue), Marshall says “Never assume that what works for you will work for others.  Indeed, the fact that you strongly like something may well be an indication that people with other values will hate it.” Insights such as this were very helpful to me.

It is always gratifying when an author presents a concept that you, too, had been pondering. Thus, I was pleased to read that Marshall also thinks that we need to mourn the end of the fossil fuel age, which was “exceptionally affluent, mobile, and exciting. The low-carbon world will have new pleasures, but no longer the sweet roar of the Ford Mustang V8.”  As a former owner of a 1965 Mustang (in 1965) and as a person who drove sports cars for years, I really identify with that idea.  Fossil fuels brought us many benefits, but now it is time to let them go.  As we do so, many of us will long for the “old days” and hate to give them up.  We should acknowledge that loss and create a way for people to grief, thereby helping us move on to a new future.  Such acknowledgement may also serve as a bridge to communities we aren’t currently reaching.

While the book is full of little seeds for further thought, I’ll bring up just one more. Marshall thinks that the climate change community and governments have placed too much emphasis on carbon dioxide (the tailpipe) and not enough on the fossil fuels themselves (the wellhead) and everything in between. This causes a disconnect, allowing our government to subsidize fossil fuel exploration and production at the same time it is beginning to regulate carbon dioxide emissions. Perhaps the divestment movement will help us focus on the fuels themselves and the need to stop making new investments in fossil fuel infrastructure.

The book is relatively short, 242 pages, and is divided into 43 chapters. Thus, one can pick it up for a few minutes and read a chapter or two, making it easy for someone like me, who never seems to have enough time to read, to get through it.  In addition, Marshall’s writing style is very easy to read and understand. I think you will find it to be very informative and well worth your time.