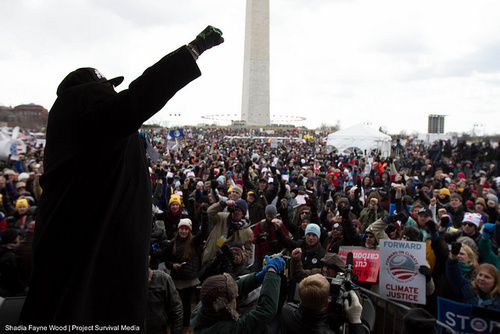 CAAV members joined tens of thousands of other concerned people from all over the country to rally for action on climate change on the grounds of the Washington Monument and in a parade around the White House on Sunday, February 17.

We heard rousing talk and impassioned pleas from our climate heros. “The speakers up on stage today represented the full diversity of our movement, from indigenous leaders across the United States and Canada, to clean energy investors like Tom Steyer, to environmental leaders like Mike Brune and Bill McKibben, to civil and voting rights activists like Rosario Dawson and Rev. Lennox Yearwood.”  – 350.org organizer Jamie Henn

Calls for action were also delivered by:

Senator Sheldon Whitehouse of Rhode Island, “I speak out on climate change each week because the cost of Congress’ inaction is too high for our communities, our kids, and our futures.”  and

“We are making plans to put the momentum of this historic day to use, and you’ll hear about them very soon …

You are the movement, and the movement is our best chance at making a difference on climate change.”